As a young adult in the post-Vatican II world I did not seriously consider a vocation to the religious life, which seemed to be dying out - and why join a losing proposition? Besides, of course I was eager for the experience of love and marriage and family.

Also my spiritual life, strong in childhood, had suffered the usual ravages of adolescence.  By the end of high school basic questions of faith were a major and tormenting preoccupation.  I felt that the only reason I kept going to church was that I lacked the courage to stop. Reading Dostoyevsky the summer before I started college for some reason brought an inner peace and at a deep level my faith became secure, even though it had little place in my daily life.

The next instrument the Lord used to bring me to himself was the witness of many evangelical Protestant college friends, who did amazing things like reading Scripture daily. I envied them a devotional life obviously much more profound and emotionally satisfying than my own. And I begged God for the gift of loving him. Not that I spent much time in real prayer; but I don't doubt this particular prayer was the work of the Holy Spirit, nor that the moment of making it was a turning point in my life.

A few years after college I had the wonderful experience most of us long for, of finding the "right person" and of loving and being loved. I will always be grateful to the young man who became my fiancé for his gift of love, which woke something in my heart and freed me to welcome a still greater love.

All through these years I was slowly turning more and more to the Lord. When we got engaged, knowing that I had traits hard to live with, and that there is little in our society that holds marriage together anymore, I began to pray far more seriously. As Lent began I was fasting and going to Mass daily. I began to read St Augustine's Confessions. What I consider my real "conversion" experience was sudden and dramatic - a Damascus experience, which I can date almost to the minute. I was commuting home from work, pouring over the Confessions, and reached the point where St Augustine has intellectually accepted faith in Christ but can't bring himself to do anything about it. The chapter ended,'" had found the pearl of great price, but still I held back." I knew right away that's me! Everything I thought I wanted in life lay before me: marriage to a good Catholic, an upper middle class life in the New York area with operas and concerts and plays and occasional trips to Europe, the prospect of making a home to raise children - and suddenly it was all not enough. It wasn't the One Great Thing. I sensed that the Lord was calling me to the monastery.

This gives only a pale picture of an experience of the love of God in the very depths of my being which was utterly overwhelming- the greatest imaginable joy. But it was all so sudden, and the demands so frightening, that I tried arguing with God - that I was already committed, that if this had happened a year later I'd already be married. The Lord gently pointed out that it was not a year later, but now, and that the commitment of engagement was not unbreakable. My heart sank at all that would entail, above all the hurt I would give to someone I most dearly loved. But I knew the spiritual and emotional experience I was having, the most profound of my life, was only given for a time. and that I needed to act while it was still there.

It was of course terribly hard to tell my fiancé, my parents and friends, what was happening. I was especially leary of confessing that it was the Trappists I felt called to, because something similar had happened in my parents' life. My mother and a young man had been very much in love when he felt a call to become a Trappist (he still is one!), and she wound up marrying his best friend, my father. It seemed unbelievable that family history was repeating itself.

Of course most people could not understand what I was doing, or why I couldn't serve the Lord just as well in married life. This is the point at which vocation is mystery, and the closest I can come to explaining mine is to say that my heart was filled with a desire, which I believed to be from God, to give my life to him completely, to follow a kind of life where everything was wholly directed toward union with God. When my fiancé asked me if I thought I would be happy in the monastery, I responded that I knew I could not be happy any other way.

Certain as I was that all this was God's doing, I was confident that he would take care of my boyfriend. After a few weeks when our engagement was in limbo I knew I had to make the break. And beautifully, the very evening I was going to do this, he instead asked me to return the ring - freeing me of his own accord. It was Holy Saturday - in some ways a descent to the tomb for both of us. But on Easter Sunday he brought me a huge bouquet. To this day I am indebted to his love and generosity, which meant more to me than I could ever say. There were of course other sacrifices I had to face to enter the monastery, but they all seemed small in comparison, and I began monastic life with a heart filled with joy and awe, and a sense of coming home. And Jesus has never let me down in the 32 years since then! 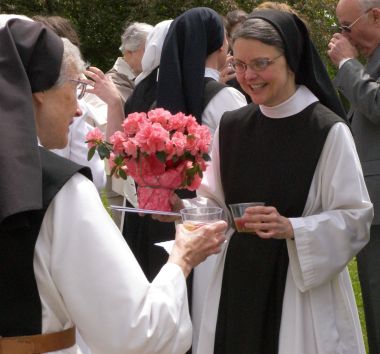